Geography: Belize lies on the eastern coastline of Central America, bordered on the north by Mexico, on the west and south by Guatemala, and on the east by the Caribbean Sea. It is separated by sea from its neighbor to the southwest, Honduras. Belize covers approximately 8,866 square miles. Belize’s mainland is roughly 180 miles long and up to 68 miles wide. Belize also consists of over 200 cayes (islands), ranging in size from a few hundred feet to 25 miles long and four miles wide. Most of the cayes are located inside the 200-mile Belize Reef.

Political Status: Belize has been an independent nation and a member of the British Commonwealth of Nations since 1981. Belize is governed by a parliamentary democracy with two major political parties, the United Democratic Party (UDP) and the People’s United Party (PUP). The Belizean constitution is similar to documents adopted by other former British colonies and includes a bill of rights.

Language: English is the official language. Spanish is also widely spoken, especially in the west. Other languages include Creole, Mayan and Garifuna.

Getting to Belize: Belize is about 2 hours and 15 minutes by air from Miami, Florida and Houston, Texas. U.S. gateway cities to Belize include Miami, Houston and New Orleans, Louisiana. Direct flights are also available from Los Angeles, New York and Washington, D.C; and from Toronto. International travelers fly into Philip Goldson International Airport in Belize City. 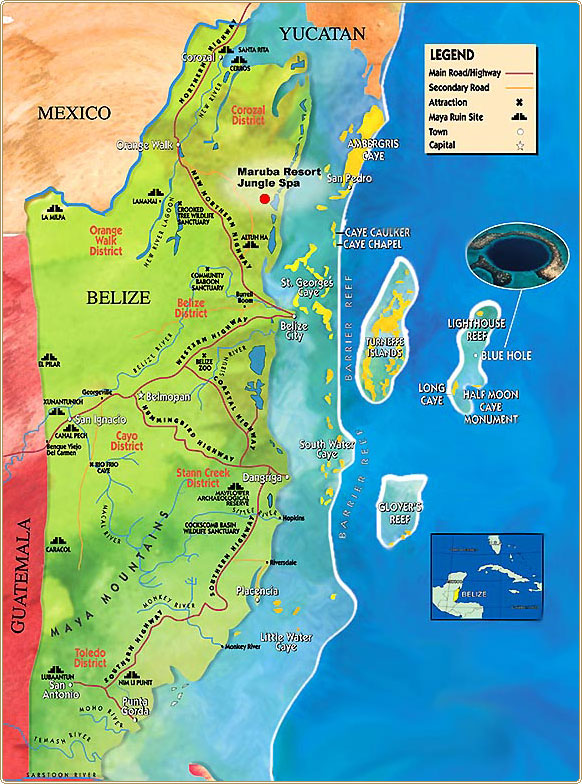 Entry Requirements: A passport and return ticket is required to enter Belize. No visas are required for citizens of the United States, British Commonwealth nations, or European Union countries. In general, cruise ship passengers are exempt from entry requirements. Due to recent changes in U.S. regulations, Americans traveling by airplane are required to present their passport at U.S. airports in order to re-enter the United States.

Ports of Entry By Sea: Boats may clear customs and entry at Belize City, Dangriga, Big Creek, Punta Gorda and San Pedro, on Ambergris Caye. There is no customs officer in San Pedro; boats wishing to enter must pay the cost of transport for the customs officer to and from San Pedro from Belize City.

Firearms: It is illegal to take firearms and ammunition in or out of Belize.

Pets: Pets must be certified as free from infection or contagious disease by a veterinarian following examination not more than 48 hours prior to shipment; animals must also be certified as having been vaccinated against rabies not less than one month nor more than six months prior to departure; and must be free of open wounds. Dogs must have a valid certification of vaccination against distemper, parvovirus, infectious canine hepatitis and leptospirosis. Animals may be required to be re-vaccinated against rabies on arrival if certifications are deemed unsatisfactory.

Currency: The Belize dollar is the national currency. U.S. dollars are accepted everywhere in Belize, although change will often be given in Belizean currency.

Credit Cards/Travelers’ Checks: Most hotels, restaurants and shops in the major towns and tourist areas accept major credit cards. Smaller establishments, however, are likely to accept only cash. Travelers’ checks should be kept in a waterproof pouch, as they are considered void if they get wet.

Electrical System: 110 volts AC (the same as elsewhere in North America) is the standard.

Water: Most Belizean homes and hotels use cisterns to collect rainwater for drinking and home use. Thus, tap water is potable with no ill effects. During severe droughts, the cisterns may run low, making bottled water advisable. Visitors should be aware of the need to conserve water during the dry season, especially on the Cayes.

Time Zone: Belize is in the Central Standard Time zone, and does not observe daylight savings time.

Sales Taxes: Belize’s sales tax is set at 8 percent and is applied to all goods and services except hotel accommodations. There is a 7 percent hotel tax. Some hotels also add a 10-15 percent “service charge” to the bill. (Fortunately, our tours are not subject to sales tax.)

Tipping: Tips of 10 percent are considered acceptable. Since Belize’s economy depends heavily on the tourism industry, tips are an important source of income for many.

Climate: Belize is subtropical, with a mean annual temperature of 80 degrees F. Winter storms may bring the temperature down to the low 60s. In the summer, temperatures may reach the mid-90s on the mainland. Trade winds blow along the coast and on the cayes most of the year, typically keeping temperatures pleasant even in the hottest months. The dry season generally lasts from November through May; while the rainy season runs from June to November. Hurricanes occasionally occur, most often in August and September. Rainfall is heaviest in the south and in the inland jungle areas. It is lightest in the north and on the cayes. Water temperature averages between 79 and 83 degrees F.

When you book with an account, you will be able to track your payment status, track the confirmation and you can also rate the tour after you finished the tour.
Sign Up

Or Continue As Guest